I Could Drive Forever

but i'm walking instead

I wake up at five a.m. in my sleeping bag on Girl Scout’s floor after a night of little sleep and lots of stomach butterfies. Nick (another hiker who stayed over at Girl Scout’s) and I pile our packs in the trunk and the three of us head for the border while the sky is dark and fuzzy. I sit shotgun and the three of us make small talk as the sun rises over the rolling desert hills.

“Do you think we’re going to make it to Canada?” Nick says.

Girl Scout pauses. Looks at the road ahead. “Yeah. Yeah, I do.”

I smile, pleased that he sees some glint of grit and determination in me. Or does he say that to every hiker he shuttles to the border?

The conversation turns to music, and soon the three of us are laughing about bad ukulele songs and obscure black metal bands.

“Goth Hiker,” he says and we laugh. “Because you’re wearing all black.”

“But my shirt is white,” I say and tug the bottom of my polyester tee out from under my black down jacket. Luckily, the name doesn’t stick.

We stop at a gas station for donuts and one last pee in a flush toilet, then drive the last few miles to the southern terminus. Girl Scout hugs us goodbye, wishes us well, and the three of us (we stopped to pick up another hiker, Steven, on the way) set off towards Canada.

The first eight miles breeze by. Nick and I hike together and talk about our families, our shared love of early Metallica and the origins of slang. I confess to him my fear of tarantulas and he his fear of poison oak. We make up games that aren’t really games but they are when you’re hiking up-up-up in 90-degree desert heat with no shade for miles and only one liter of water left in your pack to get you to your next water source.

Twenty miles and ten hours later we arrive at Lake Morena and set up camp for the night. Along the way, we see two snakes, but, thankfully, no tarantulas or poison oak. 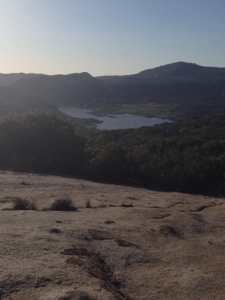 7 thoughts on “And So It Begins”